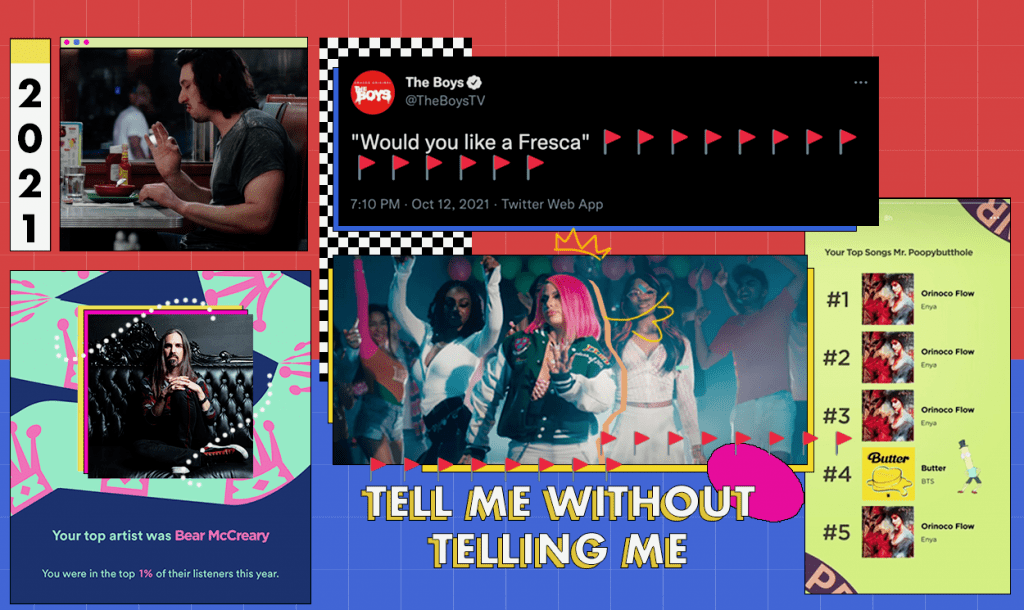 2020 was the year most of us were stuck in the sameness of our homes all day. Show me the life hack that you randomly saw one day that has become an unconscious, standard practice in your life became the cure-all hit to combat both monotony and existential dread. And if I close my eyes, I can still hear her voice.

But in 2021 — a year that was still without a doubt “a year” — it was all about our own unique experiences amongst the global chaos. The trends were skewed towards subgroups showcasing individual identity and accomplishments. In short: 2021 was the year that specificity became king and these top trends of 2021 illustrate that phenomenon.

Tell Me Without Telling Me

In early 2021, the format found mainstream success because any user could understand its formula and engage with users of the same larger identity. But once the trend seeped into other platforms (TikTok, Instagram), the specificity between identities ramped up in order to stand out and become an inside joke amongst subgroups.

Brands chimed in to easily engage their consumer base: Tell me you’re a Michelob Ultra drinker, without telling me you’re a Michelob Ultra drinker. And the addition of “I’ll go first” implemented an interactive element where users could Stitch their answers to the original. After an influx of celebrities joined TikTok to engage their fandoms utilizing the format, the trend ultimately had to bid adieu. Why? Because as a user you want to engage with Gabrielle Union’s Bring It On TikTok just to breathe the same digital air as her for one brief moment. But after Union says “I’ll go first” and recites her lines perfectly, there’s really no way anyone can top that… so why even try?

How the Movement team created for Amazon Prime Video:

In summer of 2021, @jongraz uploaded a video of Noodle, his pet pug, onto TikTok. In the video, Jonathan simply picks up Noodle and plops him back down. And in a Groundhog Day-esque game, this plopping will decide if today Noodle has bones or not – Bones Day means it’ll be a good day but No Bones inevitably means today will be awful. You know the type.

This went on for the next month. We were all captivated by our new overlord, Noodle. #NoBonesDay and #BonesDay became social copy shorthand for when people wanted to express how their day was going in a clever way. Brands found success because the relatable reach of “a bad day” is wide, especially in 2021. Sure, clinging to this pug was weird, but maybe, just maybe, we’re all so exhausted by the sameness of every day that we needed someone else, like Noodle, to seal our fate for us.

How the Movement team created for STX and HBOMax:

I Understood the Assignment

The summer of 2021 brought us the catchy hook of Tay Money’s song: I understood the assignment. The trend allowed people to show off their own specific skills or accomplishments, with the framing that they understood the assignment — ranging from fitness influencers showing off the fruits of their physical labor to new business owners showing off their niche products/service.

But this trend was more than just a format; the phrase became prominent in post copy. We understood the assignment was the perfect social copy for anything that a brand felt proud of and to showcase a moment where they went above and beyond.

How the Movement team created for Bravo:

A post shared by Project Runway On Bravo (@projectrunwaybravo)

In August 2021, a sorrowful piano score and Adam Driver’s baritone voiceover became the unsuspecting soundtrack of the summer. TikTok users creatively put their own spin on the trending sound and joined the many on #GoodSoupTikTok. If any liquid could be soup, then any liquid could be good soup. User @itsjacksonjansens captured what most of us have been feeling this year with: When you’re having a mental breakdown and a tear rolls into your mouth. And reader, that… is good soup.

For any trend that’s derived from TV/film, there’s an expectation on the brand that owns the asset (in this case, HBO) to post the original moment. Frankly, it’s unwise not to take advantage and own it yourself, otherwise it looks like you missed out on your own trend. Netflix, where the hell have you been, Loca?

How the Movement team created for HBOMax:

In fall of 2021, you couldn’t log onto your social media accounts without them. Though “red flags” typically refer to universal No’s in romantic relationships, the Red Flags meme inspired users to also point out their “deal-breakers” within a friendship, a job or even a casual conversation. The most popular Red Flag memes were lighthearted and primarily a question of taste; they included conversations that have been circled around for years on social media, with impassioned people on both sides of the proverbial aisle: Pineapple on pizza, if mint chip ice cream tastes like toothpaste, etc.

And of course, with most trends, product brands hopped on the wagon to rally their loyal consumers, essentially saying, if someone in your life doesn’t like our product, stay the hell away from them because they lack the sophistication that you do! For entertainment brands, like streaming service handles and TV series/film handles, these low-lift, primarily text and design-based memes are often a gold mine to tap into a titles’ fandom.

How the Movement team created for The Boys and Amazon Pets:

When the clock strikes December, every Spotifier rejoices when Spotify Wrapped appears. And if you have even mildly cool music taste, it’s a fun ritual to share your results on your personal social accounts and show the normies that you listen to something else other than only Taylor Swift or the Hamilton soundtrack on repeat.

2021’s Spotify Wrapped knew we wanted chaos, and it delivered. Along with Top Artist and Top Song, each user was also given a musical aura reading along with two personality descriptors — moody and focused, whimsical and fun. Twitter and Instagram users with skills in PhotoShop had a field day with changing their Top Artist to an irreverent choice or changing their aura to something unhinged.

How the Movement team created for Starz and Adult Swim:

And I wouldn’t have it any other way. #Outlander pic.twitter.com/ZtP3T3haTw

If these trends and these other 2021 social moments are an indication of what’s to come, I’d say 2022 will be a year filled with even more specificity amongst subgroups and a rise in unhinged, dramatic statements that users and brands can hop on.