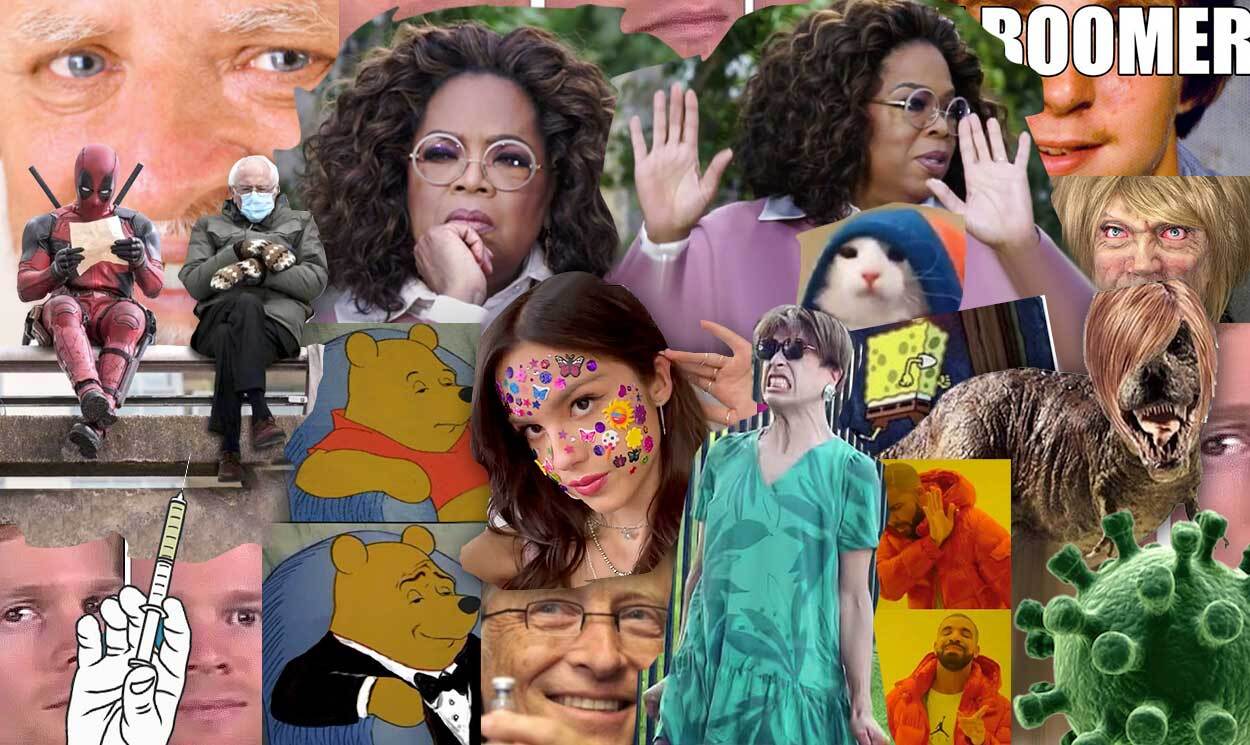 The Best Social Media Moments of 2021

It’s hard to believe we’re done with 2021. What is time anyway, though? The pandemic has warped days and months and changed life as we know it, particularly when it comes to our all-consuming digital lives. With more attention to screens than ever before (four hours a day has been the average time spent on mobile), social media had a new kind of awakening. 2020 had its own wild year on social media, which has only fed into our current year. Here’s what we’ve bookmarked as the biggest moments of 2021.

Bernie and His Mittens

While Smialowski criticized the quality of the photo’s composition, it had no effect on its virality. Sanders’ casual brown coat and humble mittens seemingly made everyone smile during a fraught time in American history, not long after the Capitol insurrection, with a country living through one of the most challenging times in recent memory.

One of the first Tweets of the image racked up more than a million likes in the few days after the inauguration. From there, the photo was seen nearly everywhere and in almost every which way imaginable.

“This could’ve been an email” pic.twitter.com/kn68z6eDhY

Sanders said he was just trying to keep warm and that the mittens were made for him by Vermont schoolteacher Jen Ellis, who made them out of repurposed wool sweaters and fleece from recycled plastic bottles. Sanders’ team sold merch featuring the image on his site, the first run of which sold out in 30 minutes, with nearly $2 million going to local Vermont charities.

Appointment television is pretty much a thing of the past. With everyone streaming everything, it’s rare that the whole world tunes into the same show at the same time. The exception? Oprah, of course. When Oprah Winfrey interviewed Meghan Markle and Prince Harry for a CBS two-hour special, 17.1 million viewers tuned in from the United States and another 11 million from the UK.

The interview covered topics both juicy and serious, touching on race, motherhood and mental health, all of which spurred social media conversation and memes.

I also appreciate tonight as an opportunity for Oprah to remind us who the fuck she is. THERE. IS. NO. COMPARISON. #OprahMeghanHarry

“It was the first time we got to hear Meghan’s side of the story,” says Movement’s social media manager Lauren Pak. “The images of Oprah took off as much as the content of the interview did, and it caused interest in the interview and the important discussions they had.”

Which Oprah are you? I’ve been 1 all day. pic.twitter.com/jzc8ZWHVs8

The pop star reawakened the angsty, heartbroken teen in all of us thanks to rumored love triangle straight off the set of High School Musical: The Musical: The Series (try to say it five times fast). The Driver’s License singer hit the top of the charts and saturated social feeds across all platforms, something Movement’s social media manager Olivia Connolly found fascinating, particularly because Rodrigo’s appeal transcended her ostensible Gen Z fanbase to millennials and even Boomers.

“It’s clear her team concepted her music videos thinking about what audio and scenes would be recreated on TikTok, and there are also Instagram filters to let people mimic her album cover,” she says. “It’s really interesting how she’s become a brand, as a musician, and the goal is to get people to share not just the music but the content.”

Along with Rodrigo’s album release came Tweets, TikTok mashups, and an ongoing awareness around the album thanks the delivery of swag boxes complete with tissues (for crying about heartbreak, obvi), branded Sour Patch Kids, bumper stickers and other swag—though recipients weren’t your run of the mill fans. Instead, they went to Kim Kardashian, Gwen Stefani and Ben Platt who all shared their unboxing videos.

Darnella Frazier was only 17 when she used her cellphone to record George Floyd’s murder on May 25, 2020. She later uploaded the video to Facebook, and the world changed. Protests and awareness, Juneteenth acknowledgements and anti-racist reading lists are only some of the ways things have changed since. However, in 2021, the video became one of the prime pieces of evidence used in the trial against Derek Chauvin, who was found guilty on all three counts against him in the killing of George Floyd.

Frazier’s reaction to the verdict, posted on Instagram, captured what many were feeling about the trial: “I just cried so hard….THANK YOU GOD.”

Twitter lit up around the verdict but also about Frazier’s role and bravery in capturing a key piece of evidence. President Biden recognized her as he addressed the nation after the verdict, calling her “a brave young woman with a smartphone camera.” The Pulitzer Prize board also awarded Frazier a special citation for “courageously reporting the murder of George Floyd, a video that spurred protests against police brutality around the world, highlighting the crucial role of citizens in journalists’ quest for truth and justice.”

Perhaps you heard about this when Gen Z started shaming millennials for wearing their hair parted on the side. Then came the war on skinny jeans. And ultimately, for better or for worse, cheugy.

Gen Z came hard for Millennials on TikTok, calling them out for being as uncool as can be. One Buzzfeed millennial writer’s article was headlined, “Gen Z Is Making Fun Of Millennials And Honestly We Deserve It.”

The teasing has had a largely jocular tone (after all, Gen Z hardly takes themselves seriously), but some took it personally, posting about millennial realities and that not all swaths of generations can be generalized.

“The Gen Z vs Millennial drama seems silly but raises this generational battle about how people see the world differently and act and engage social media differently,” Lauren says. “I think the recent rise of the generational gap between Gen Z and Millennials has taken off with the TikTok era, and how prevalent that platform is in setting trends and sparking conversations in an area dominated by Gen Z. There are contrasts not only in the things people talk about but also how and where they talk.”

What else will make a splash on social throughout the rest of 2021? Check back at the end of the year to find out.

“Because 2021 seemed to be a hangover from 2020, I think many of us look back at simpler times through a romanticized lens,” says Nick Mangiapane, Movement’s Associate Director of Digital Content.

Photos of J Lo and Ben together featured easter eggs to the past—a watch Ben wore in the Jenny from the Block video, a hot yacht moment recreated from the same video—and saturated social feeds, with JLo going IG official herself in July.

“2021 made it harder to look ahead as we are headed into another wave of the pandemic,” Nick says. “Move forward, people! Move forward! Stop romanticizing the parts of the past that didn’t work.”

When Simone Biles stepped off the competition floor during the 2020 (but really 2021) Tokyo Olympics, the world (and her team) wondered whether the greatest gymnast of all time was okay. Though Simone returned, she didn’t compete, choosing to protect her mental health rather than risking a fall that could hurt her team.

Representing a nation reeling from the pandemic in front of a global audience doing the same, Simone sent a clear message to everyone, not just athletes.

“Any athlete who has ever felt the pressure of competition can recognize that this decision was more difficult than any skill Simone will ever perform,” says Movement Creative Director Lisa Norris. “What an incredibly courageous move and a huge wakeup call to kids and adults to listen to their gut and put their health first, finally.”

the outpouring love & support I’ve received has made me realize I’m more than my accomplishments and gymnastics which I never truly believed before. 🤍

“This was peak 2021,” Nick says. “Facebook has really become the focus of scrutiny for their role in leaking data, promoting misinformation, and much more.”

The issue was tied back to server computers at a data center, an announcement the company made on none other than Twitter, where many users flocked to during the outage. The day prompted not just thousands of memes but a renewed focus on the world’s 3.5 billion users’ reliance on Facebook.

“When Facebook shut down right after whistleblower Frances Haugen revealed even more about the company, people turned to other platforms to join the loud conversations happening,” Nick says. “It was a total schadenfreude moment: happiness at the misfortune of Facebook. Our culture is at a tipping point when it comes to how they view large corporations who piggy pack off the everyday person.”

Sesame Street got attention from all over the world when they revealed their vaccine status on Twitter. Once the Pfizer-BioNTech Covid vaccine was authorized by the FDA for 5-11-year-old’s, the stalwart children and family brand posted Tweets from Big Bird and Elmo about vaccines.

I got the COVID-19 vaccine today! My wing is feeling a little sore, but it’ll give my body an extra protective boost that keeps me and others healthy.

Ms. @EricaRHill even said I’ve been getting vaccines since I was a little bird. I had no idea!

In what could have been a hopeful moment for children and families, anti-vaxxers and politicians spewed hatred about the beloved character’s tweet, calling it propaganda— though Bird Bird has been vaccinated since 1972.

“Sesame Street is such a trusted brand, and this is a great example of how the brand has helped walk parents and children through important conversations over the past two years,” Olivia says. “Not only about the pandemic but about racism, too.”

The #FreeBritney movement dates back to a conservatorship Britney Spears was placed under in 2008 after a public breakdown. Her father Jamie Spears was legally in charge of Britney’s life, launching concerns among fans and FreeBritney.net in 2009. The movement grew tremendously via social, thanks to Britney’s Instagram (where she has more than 25 million followers) and fans decoding her posts for messages that she wanted her conservatorship to end. The conservatorship was officially ended in November, to a trove of social reactions, even from Britney herself.

“The movement really felt like one of the only things that united us this year because it was a moment of reflection to see how we as consumers of media wronged her by going along with the treatment she received and how that allowed us to ignore and essentially be okay with the abuse of her conservatorship,” Carly says. “It really opened up space for the conservatorship abuse in general and it felt like a payoff getting to see her get her justice.”