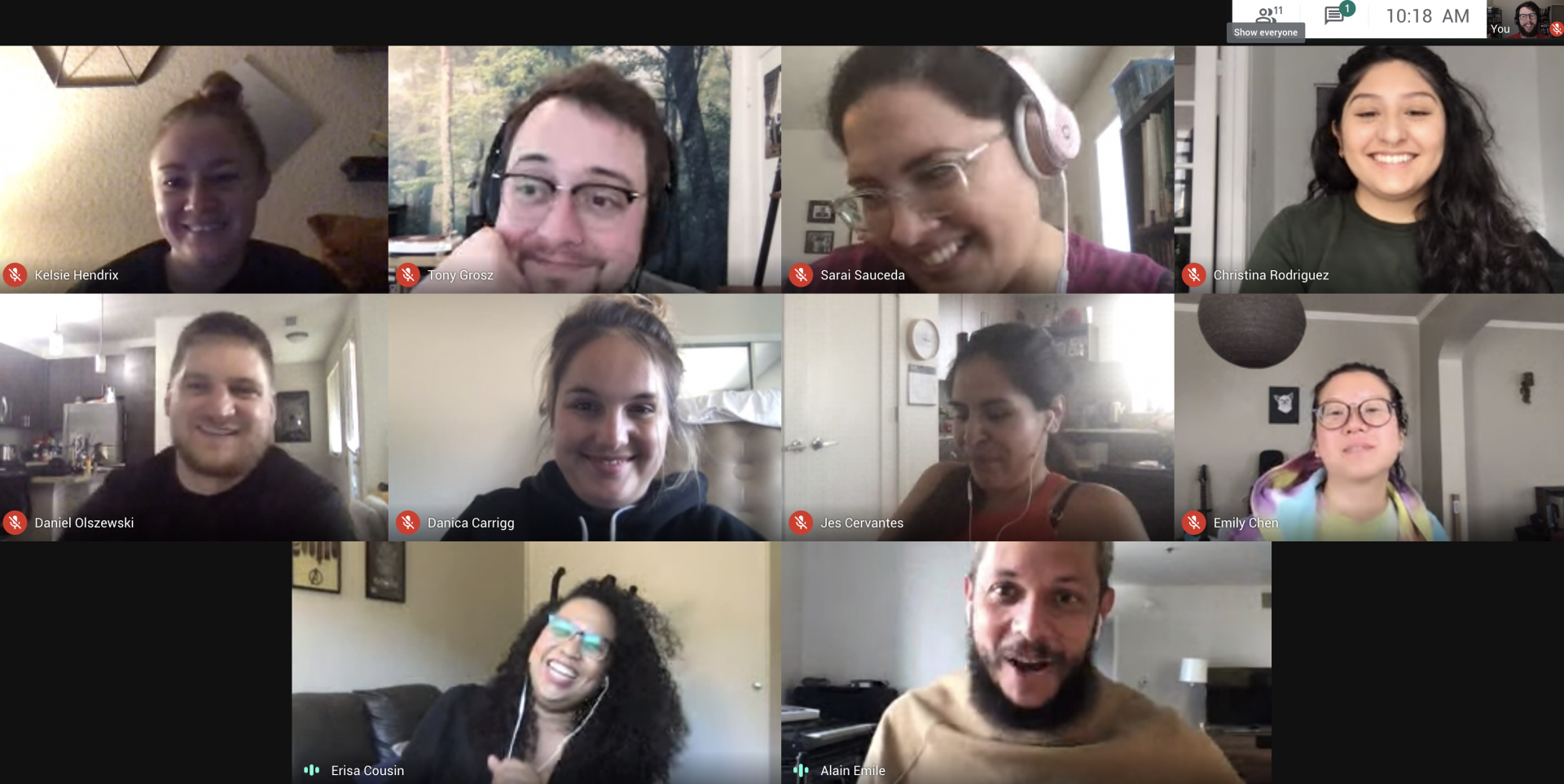 Everyone remembers it. When they realized that the coronavirus pandemic would affect them in profound ways. Maybe it was when Tom Hanks posted his positive test on Instagram or when the NBA canceled all its games. For Eric Dieter, Movement Strategy co-founder and COO, that moment happened in late February.

“There was kind of a feeling that this was a real situation,” he says. “It was so unprecedented to think about there ever being a world in which we are fully remote, but we were planning for the worst case scenario.”

We all know what happened next.

“Every office followed New York and CDC protocols,” Colette says. “It was a Wednesday, March 11, when we communicated to the agency that it was optional to come into the office the rest of the week.”

Colette went into the office the next day and was one of only three people there. Since then, the staff hasn’t been back. Eric had a similar experience, remembering a meeting on March 12 in a packed conference room in the Denver office.

“We all looked around at the start of the meeting, thinking, is this really going to be our last meeting in person?

“We all looked around at the start of the meeting, thinking, is this really going to be our last meeting in person? And it was the last in-person work thing that a lot of us in the Denver office have had since,” he says.

As Colette and Movement’s partners quickly put together protocols for how to move forward, employees were facing their own personal challenges.

Nick Mangiapane, a senior content producer based in Los Angeles, had a trip to Thailand booked for early March with his partner and was already there when he got a message from a colleague saying that Movement’s offices had closed.

“Before I left for the trip, we knew what was going on in the world, but we didn’t know to what extent,” he says. “Colette did tell me I’d have to quarantine for 14 days before coming back to the office. But the office hasn’t reopened.”

Upon getting home, instead of concerns about a 14-day quarantine before getting back to work, Nick and his partner had to stock up on food, hand sanitizer and the ultimate March 2020 necessity: toilet paper.

“I took that first day back to get sorted and get what we needed, and my team was really kind about it,” Nick says. “Everyone was super understanding because, at that time, we were all in shock about everything.”

“Everyone was super understanding because, at that time, we were all in shock about everything.”

That kind of understanding extended to every facet of the business, with partners ensuring that plans for remote work and extra time off for potential illnesses were flexible and practical.

Christy Pregont, executive creative director and partner for Movement who’s based in New York, got sick with COVID-19 right around the time the offices closed.

“It was at the time when you didn’t go to the hospital unless your fever was off the charts, we didn’t know as much as we know now, so I was messaging with my doctor whose main advice was: ‘don’t go anywhere,’” she says.

Christy says she slept for at least 20 hours a day when she was first sick and that it wasn’t until July that she could start working again. Working again, however, meant starting her day at noon.

“I was communicating with our CEO Jason and the partners, and there were moments when I was trying to work and they were like, ‘Get out of here,’” she says. “I was experiencing breathing problems, heart problems and just exhaustion.”

Although it’s been a year, Christy says it doesn’t feel that so much time has passed, noting that she still finds herself out of breath doing random things (like making the bed) and that the experience revealed how healthy someone needs to be in order to sit at a computer and work.

Working entirely remotely didn’t seem possible until it had to be. The agency had been developing a practice of allotting two days for remote work per month prior to the pandemic. There was flexibility, but for the most part, everything happened at the office. Even hiring stayed local, with recruiting specific to each office for full-time and freelance employees.

When the shift happened, and so suddenly, the partners took swift action to make remote work functional and efficient. Eric says his upbringing around construction gave him a foundation for work not getting done unless you were literally in person doing the work, so he was skeptical about the agency’s ability to continue being effective remotely.

“I will be the first to admit that I was very quickly proven wrong,” he says.

This tracks with research across many industries, which shows that 94% of employees said productivity was the same as or higher than it was before the pandemic, even with remote work.

94% of employees said productivity was the same as or higher than it was before the pandemic, even with remote work

Colette says that the partners decided to err on the side of caution by communicating as much as possible. Weekly Monday morning all-staff meetings included COVID-specific topics each week, like how people were coping, gratitude shares, resources for remote work and personal wellness ideas. A Slack channel was created to share various COVID resources. More meetings were put on calendars across the board for accountability and communication sake but were ultimately scaled back once a staff survey revealed that people were over scheduled and, like much of the world, over-Zoomed.

Movement also developed daily briefings for clients to provide information about coronavirus conversations on social media to help clients make key decisions. As a result of these efforts, productivity across the agency held strong and clients remained engaged and informed.

Challenges remained, with employees in caregiving situations feeling pressure in a different way. Dhanuj Selvaraj, a data strategist for Movement who has a four-year-old daughter, was planning to move with her family to the Bay Area from Denver right as shutdowns began.

She’d arranged to work remotely in California regardless of the pandemic but then, after driving from Denver to her new home, found herself in a situation where everyone was home. Her husband was doing his work, Dhanuj was doing hers, and their daughter Nila was set up on as many Zoom classes as possible.

“We’d already found a daycare to start in April but that went remote, so April was a mess,” Dhanuj says. “And honestly, today, we’re in a much better place a year on in terms of finding a routine that works for the three of us. Everything is very schedule-based and we think hour by hour for the day and plan the night before.”

Movement’s increase in flexible working hours helped Dhanuj and other parents at the agency balance their new lives. A special meeting was scheduled to address these challenges plus follow-up calls with parents and even optional biweekly calls for their children to meet each other virtually.

“That helped the children understand that mommies and daddies are working and these are the people they’re working with and these are their families,” she says. “Leaders at the company being parents definitely affected the support and understanding. It’s a top-down effect.”

The pandemic was enough of a challenge for everyone, but cultural events prompted a new kind of mental space that everyone needed.

During the national conversation about racism in the wake of George Floyd’s murder, the company worked with its Diversity, Equity and Inclusion team to provide resources and education opportunities for everyone. This also meant allowing more time for discussions around race and diversity issues plus flexibility as employees protested across the country.

“Protesting felt like the least I could do. I was very vocal with my own team to take time off for mental health or for protesting.”

Jenna Frank, director of the digital content and production department, who’s also based in Los Angeles, says that she witnessed two sides of what was unfolding: the riots and the protests. A small business she owned had to be boarded up at the same time that she was planning how she’d participate in protests.

“Protesting felt like the least I could do,” she says. “I was very vocal with my own team to take time off for mental health or for protesting. I felt the freedom to say that to my team and that came from the fact that my leadership was telling me that as well.”

When she alerted colleagues that she’d be attending a protest, Movement’s CEO Jason Mitchell texted Jenna to write his number on her arm in case she got arrested so that he could pick her up.

This spurred further thought on ways the agency could take action and help various causes. One big focus: voting rights. An all-company email communicated that poll workers would be provided time off, so Rajiv Smith-Mahabir, who works in video production for Movement out of Los Angeles, worked at the polls, taking a week off to do so. Flexibility was also provided for people to vote themselves. Movement put together a list of voting sites and organizations to follow for each of their office locations on social, too.

Space and flexibility is new to current working culture, where research shows that the effect of remote work on mental health has employees feeling they should be online and available as much as possible.

Eric says he and the partners are working to stay up to date with processes to help mitigate this sentiment, like promoting employee development, ensuring employees have all the tech equipment they need, and updating the onboarding process for new hires starting in this digital world.

“We’re going to continue to look at things like that as a company to ensure that we have a very equitable policy structure,” he says.

What this means exactly is up for discussion, one that is ongoing between Eric, Colette and the Movement leadership team.

“I think we are in the mindset where we know we want to stay remote, we implemented an unlimited work from home policy, and we’re ready to work through whatever is next.”