April 2020. We were one month into the pandemic and bored out of our skulls. I was willing to download any app that offered any sort of connection to the world outside my apartment. So getting the exclusive invite to this new hyped-up platform called Clubhouse was fated – or masterfully-timed. Like the AOL chat rooms of the early aughts, connecting with strangers solely on our interest in a single topic felt nostalgic. After being shackled to social platforms that focus solely on perfectly filtered visuals and celebrating how things look, we were excited to invest my time into a platform that focuses on how things are.

What Are Audio-Only Social Media Platforms?

With the rising interest of podcasts, audio-only social media platforms were given a runway. The two major audio-only platforms to take advantage of that are the aforementioned Clubhouse, along with Twitter Spaces. Both operate like “drop-in” audio chat rooms – if you’re scrolling on the app and you see a topic you like, you can pop in as an audience member, lean back and listen.

On both platforms, users create and host a room or a space. Within the title and description, they specify what the conversation will be about so users scrolling the app can determine if it’s something they’re interested in jumping into. Users can also create events which are essentially just scheduled talks. Events are certainly more recommended for brands than randomly hosting a room/space because events allow interested users to RSVP and receive reminders. Unlike practically every other social media production, audio-only events for brands are highly attractive because they cost virtually zero dollars to produce. There’s no extra equipment, no cameras, no hair and make-up, no sets and speakers from around the globe only need to log into their phones and speak in the built-in microphone.

The differences between both apps as a listener are minimal. However, from a brand that’s looking to invest time into audio-only spaces, the distinctions are a bit more important to take into consideration. 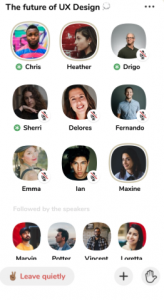 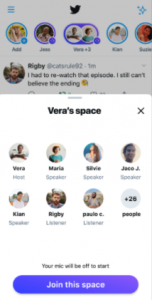 The first key difference between Twitter Spaces and Clubhouse is reach. Since Twitter has been around for 16 years, there are more users populating their Twitter feed on a daily basis. And because Clubhouse is practically a newborn in the social platform landscape with hardly two years under its belt, their daily user numbers are far smaller. Put plainly: brands have been able to grow larger audiences over time on Twitter and frankly might not have a presence on Clubhouse at all. 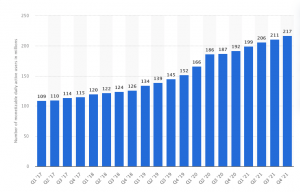 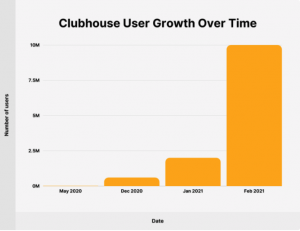 To give an example… Right after the season 5 finale of our client Paramount+’s TV series SEAL Team, we wanted to hold an audio-only live conversation with the stars of the show. Choosing between Clubhouse and Twitter Spaces felt like a no-brainer. Paramount+ has 230K followers on Twitter – not including the SEAL Team Twitter account or the accounts of the stars who were speaking. The show has a lively presence on Twitter with dedicated fans.

Join our Twitter Spaces event hosted on @paramountplus tonight at 5pm PST to discuss the #SEALTeam season finale with the cast and @SEALTeamWriters. See you tonight!

On the contrary, the show has no known presence on Clubhouse. And the crossover between a young, Gen Z/Millennial-inhabited app like Clubhouse and the show’s mostly middle-aged audience, felt extremely minimal. The event wouldn’t have been nearly as successful if it weren’t on Twitter Spaces.

But that’s not to say we would recommend Twitter Spaces for every live-event. Let’s say you’re a small tech brand looking to build a following and want to create a talk where CEOs discuss: Everything You Need To Know About NFTs. We would choose Clubhouse in a heartbeat. Because users who log onto Clubhouse daily are looking specifically for these talks – audio-only content is the sole focus of the app. A talk like this would get completely drowned out on Twitter if it didn’t have huge followings attached to it. So although Twitter has a wider reach and more daily users, audio-only content still can feel like an afterthought and does not equate to a large portion of them willing to drop into a random audio-only Space.

Some might think that Clubhouse is dead because it’s no longer swarming with surprise drop-ins from celebrity guests – I mean, we all look back on the Tiffany Haddish and Oprah days fondly. But although it may not be as hyped up as it once was, Clubhouse is alive and well with niche groups, specifically in business, technology and science circles. Movement even produced a Clubhouse NFT auction for a Netflix project, This is a Robbery. It was a huge success with 100% positive sentiment and marked many firsts – as the 1st NFT Activation for an Entertainment Platform, the 1st Art Auction for Netflix and the 1st Clubhouse Activation for Netflix Non-Fiction. 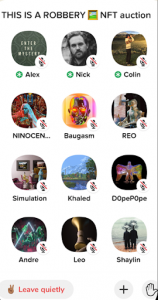 How Brands Should Explore Audio-Only Platforms

So are audio-only events beneficial for brands to invest time into? They certainly can be. They’re low-lift, virtually no budget and easy-to-use. To go back to the Paramount+ event example, we were able to strengthen the show’s fandom for an hour using zero production costs. The hosts and guests were able to log on from their phones wherever they were and simply discuss a topic that their fans were hungry for. And maybe it’s just the nostalgia talking, but it feels like being in an AOL chat room again.