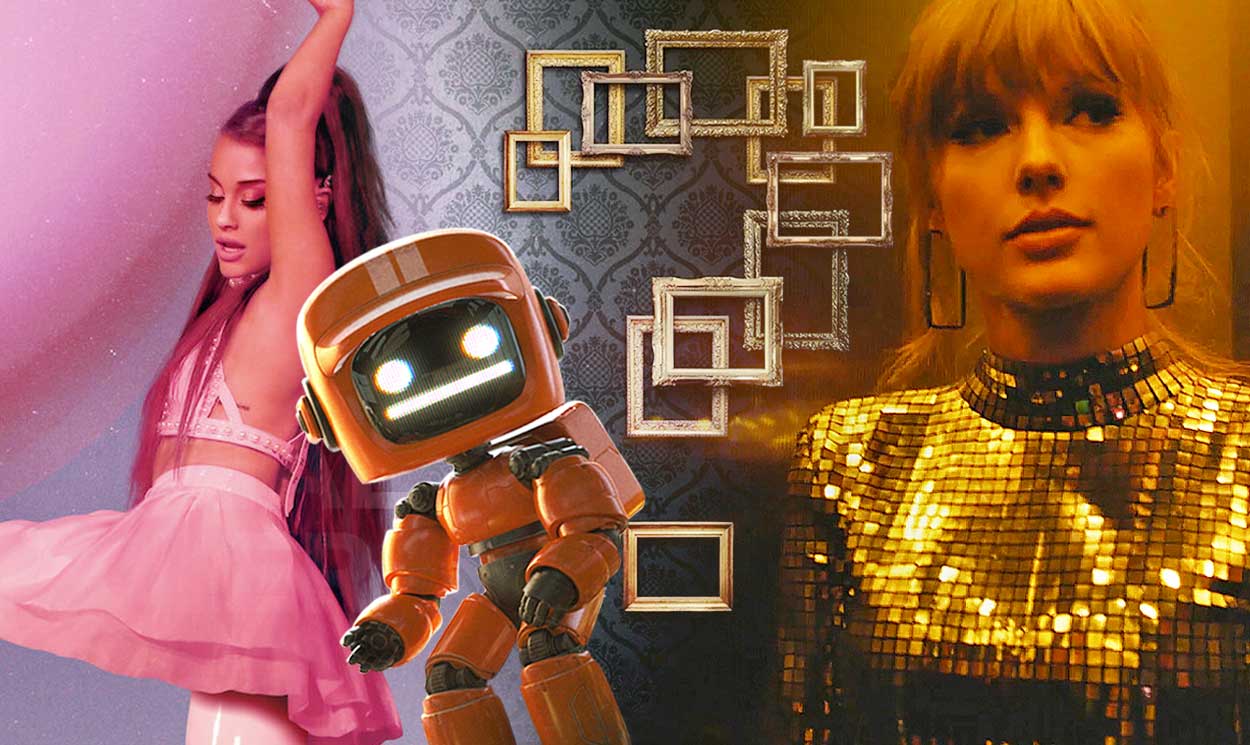 5 of Our Favorite Netflix Projects

Getting to work with arguably the largest streaming service in the world has been a dream for Movement Strategy. With Netflix spending $17 billion on content in its current fiscal year, there are plenty of opportunities for Movement Strategy to identify the right audience for each program and produce engaging content on social. While we enjoy the creativity we get with each opportunity, there are a handful of favorites. Our Creative Team breaks it down.

The premise of Love Death + Robots would not have initially been on Lisa Norris’ radar had this project not come by her desk. The show is a collection of adult animated short stories in various genres.

“I’m not an adult animation fan, so it’s just something I never even thought to watch,” Lisa says. “But then I got really into it. It’s edgy, raunchy, provocative, it was a lot of fun.”

Unlike a tentpole production where marketing may face certain constraints, this project was somewhat of an unknown commodity.

“We didn’t know if it was going to be successful,” Lisa says. “Yes, David Fincher and Tim Miller are the names behind it. But adult animation appeals to a very niche group of people. We were able to not really care about marketing to the masses and instead focus on how to wow this specific niche — because if we could do that, their fandom would do the rest in terms of building a community around the show.

The show’s innovative structure as an anthology series of five to ten minute episodes also provided a lot of room for creativity.

“This was a whole new format that we had to explain”, Lisa says. “We really felt like the sky’s the limit with Love Death + Robots, that anything goes with getting people excited on social media.”

For Lisa, the quirkiness and irreverence at the heart of LDR allowed Movement to go beyond the normal guardrails.

“The Netflix team that we partnered with was really open to pushing the envelope – we saw people talking about wanting to get a tattoo of symbols from the show, so we quickly orchestrated a partnership with eight tattoo studios around the world to offer free LDR tattoos for a day. Fans went wild.”

One of Lisa’s other favorite parts about the campaign was using dormant social channels from Netflix shows that have ended to promote Love Death + Robots. The Movement team staged “hacks,” where they took over accounts and linked them to Love Death + Robots content.

“There’s one episode of Love Death + Robots where a yogurt tries to take over the world, so we highlighted that on the House of Cards page, and people had no idea what was happening,” Lisa says. “We just caused a ruckus.”

Creative Director Connie Shu did not consider herself a Swiftie by any means when Movement CEO Jason Mitchell brought up the Taylor Swift Documentary Miss Americana as a project. “He said we needed to find a super fan,” Connie says.

The goal was to create social buzz and awareness in a campaign for Miss Americana, a documentary about one of the biggest music stars where she became an open book, sharing intimate details of her life over the course of a few years. The documentary made headlines for sensitive subjects like her mother’s cancer diagnosis, Taylor’s body dysmorphia, sexual assault trial, political views and scrutiny from the media.

Jason assigned the project to super-Swiftie Clare Lulich, Movement’s Associate Director of Content Strategy. But when Connie asked Clare if she needed help, Clare welcomed her with open arms and Connie became a Swiftie in her own right.

“I obviously did my homework on the Taylor Swift world, but working with Clare made it really easy to stop and ask, okay explain this to me, why that matters to the zeitgeist and the fans,” Connie says. “I also typically oversee a project and very rarely touch them, but for this job, I got to design and do the creating.”

Connie and Clare didn’t work directly with Taylor but with a team at Netflix who worked with Taylor’s team. However, Connie knew that her design for the #MissAmericana was something Taylor (and her legions of fans) were tweeting about amped up the fun.

Omg the #MissAmericana hashtag has an emoji now how cute 🥰

Perhaps even more important to Connie about the project was that she created a true partnership with Clare.

“There are typical partnerships in our business, like an art director and a copywriter, but this project brought about a unique opportunity for Clare and myself to really unite the strategy and the creative in a cohesive and collaborative manner, ensuring that everything was aligned,” she says. “Since then, we’ve developed an incredible dynamic and work on most of our projects together.”

The relationship works so well because the two have a mutual respect for each other and each other’s teams. Connie respects Clare’s strategic angles and Clare respects Connie’s creative ones.

“That’s not to say I’m not strategic, and she’s not creative, but that we understand we swim in our separate lanes and we’re in the same pool,” Connie says. “Sometimes our lanes cross and we come up with something better together so the whole is greater than some of the pieces.”

Alex Krutchkoff, This Is A Robbery

Creative Director Alex Krutchkoff received a brief for the Netflix docuseries This Is A Robbery in spring of 2020. The series was set to launch the first week of April, telling the story of what’s often referred to as the world’s greatest art heist, when 13 works of art were stolen from the Isabella Stewart Gardner Museum in Boston in 1990.

As Alex was reviewing the brief, NFTs (or non-fungible tokens) were top of mind, particularly because the art world was buzzing about Christie’s selling an NFT for $69 million. Netflix’s team had NFTs top of mind, too.

“The empty gold frames are still hanging up in the museum, waiting for the artwork to return,” Alex says. “So we came up with an idea to enlist 13 digital artists to reimagine the 13 masterpieces and auction them off in the first-ever NFT activation for Netflix.”

The classic pieces of art, by artists like Rembrandt, Manet, Degas, and more, are the kinds you’d learn about in art history class. The Netflix docuseries provided a new way to look at this valuable art, and to Alex, the NFTs created a perfect marriage of contemporary art and classic art. There’s a line in the trailer where a curator said something about the gold frames waiting for the artwork to return, so the project felt like Movement was spinning a contemporary version on returning the souls of the artwork to their frames.

“We were blazing new territory, which made it so fun,” Alex says. “Netflix was so excited to be one of the first brands out of the gate with an NFT activation. They’d never done a Clubhouse event before. I felt honored to moderate the conversation between the filmmakers and the 13 digital artists.”

Alex’s venn diagram of interests aligned perfectly with the campaign, too. Working with an emerging platform and technology plus true crime, digital art, and documentaries made putting together the project quite a ride. The 100% positive sentiment, particularly from a typically skeptical cryptocommunity, was the cherry on top.

“Love Death + Robots was the first Netflix Original title that we worked on as lead social agency, which was really cool,” Edgar says. “Plus, I’m a big Deadpool fan, and knowing that (Deadpool director) Tim Miller was involved with the show definitely made things interesting.”

Edgar was responsible for the look and feel of how the campaign appeared on social media, and the wide latitude provided by the show runners empowered him to be creative.

“It was pretty open-ended and crazy and fun to start with—they sent some brand guidelines, which are always helpful, but besides that there were no other rules besides ‘make it fucking cool,’” says Edgar. “That’s exactly the kind of instructions that I like, to be given the freedom to play and have fun throughout the creative process.”

One particular part of the campaign Edgar loved working on was the first-ever Netflix YouTube livestream supporting an original series. Eight hours before the premier, a live countdown launched with symbols from the show—almost like a slot machine. Fans that guessed the show’s symbol combos unlocked exclusive sneak peaks.

A self-professed anime and comics geek, Edgar had a chance to infuse his sensibilities as a fan to connect with the Love Death + Robots community.

“We just got to have fun with the fans, and you felt the love and you felt this cultural understanding,” Edgar says. “The nerdom was just coming out at this point.”

Clare Lulich: Ariana Grande: Excuse Me, I Love You

Associate director of digital content Clare Lulich had been working with Netflix for more than two years when she got assigned to work on a documentary for the most followed woman in the world on Instagram.

“It was an exciting challenge and an incredible opportunity,” Clare says. “The documentary follows a concert, and it was released in December of 2020, when people had no live music and no idea when they would be seeing live music again.”

The goal was to make the roll out feel like an event—but a particularly special event knowing everyone was still following stay-at-home orders for the pandemic. We worked incredibly hard to create concepts that had the same look and feel of Ariana’s pages. The team did so much research on her social habits for the creative, looking at her past album work and what she’d been posting recently.

“We created purely social assets for a concert-type promo that had a five-day run where the fans received one thing on each stop of the tour,” Clare says.

Having worked with big name Netflix projects before (like Taylor Swift and Shawn Mendes), this felt similar, but with a little something special thanks to Ariana’s own social presence and involvement.

“She posted more of our work than anyone so knowing we delivered assets she wanted was a testament to our hard work and research and Connie’s team’s work on execution,” Clare says. “We didn’t have face-to-face meetings with her but it felt like we had her buy in on our strategy and it’s something all of us are incredibly proud of to have someone of her caliber posting our work.”