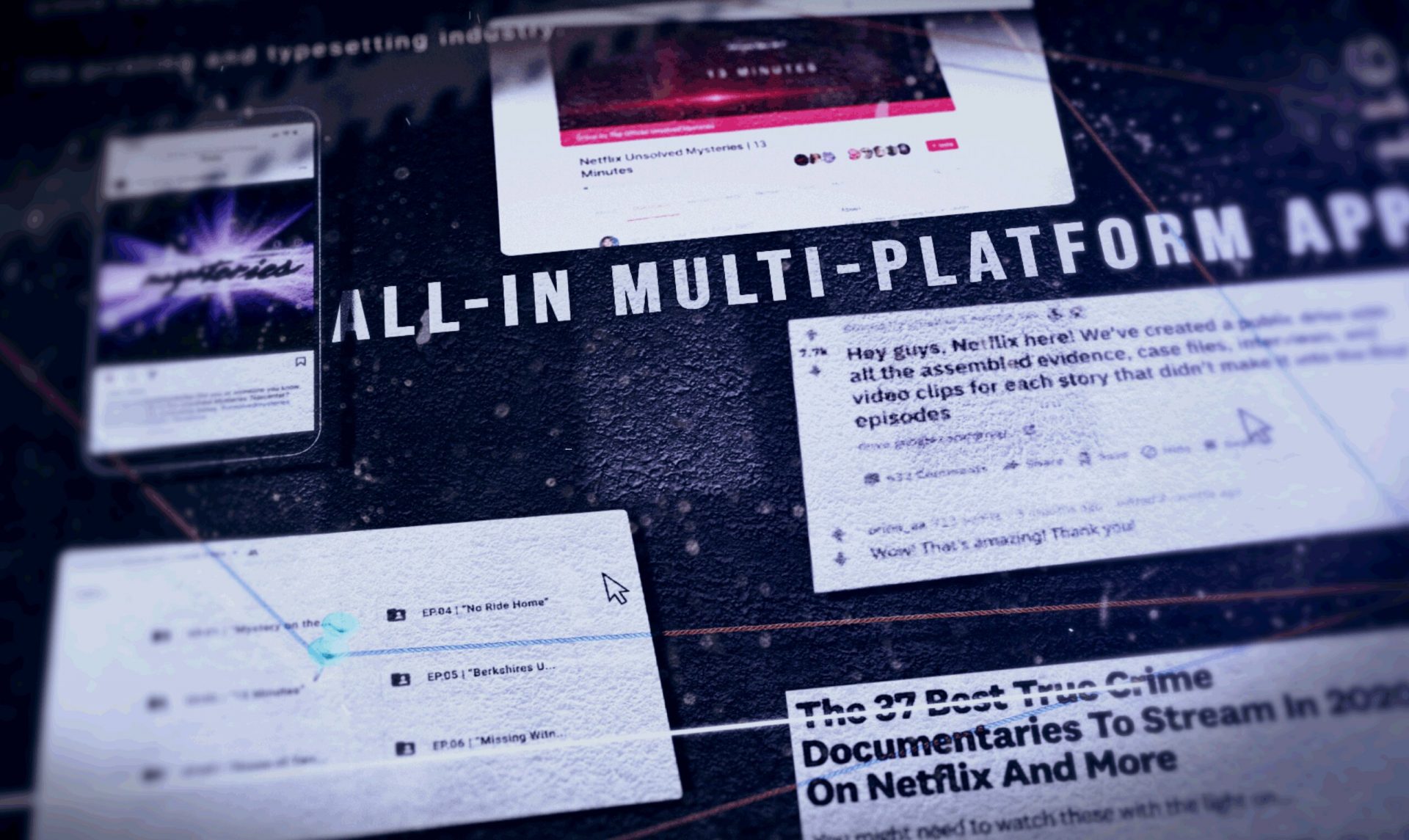 Some things just work better together than on their own. Peanut butter and jelly. Tina Fey and Amy Poehler. Michael Jordan and The Chicago Bulls. The Avengers.

When we put social media strategies together, it’s standard to think about which platform is best for which client, which goal and which audience. Oftentimes, though, strategies are executed on that platform only, with a singular focus that can surely be successful but maybe isn’t maximizing a brand’s potential. When platforms are paired strategically together, there’s a lot more success to be had—and a lot more fun, too.

Lisa Norris, Creative Director at Movement Strategy, worked on the new Unsolved Mysteries docuseries in 2020, creating a multi-platform social campaign that won Digiday’s Best Multi-Platform campaign for the year. What was meant to be a two-month campaign for the first six episodes of the series extended another six months, straight to the launch of the series’ next six episodes.

“Fan conversation on all channels was so strong and continued beyond the first few weeks after the initial release, which is an anomaly for a show that drops all episodes at once,” Lisa says. “When people binge a show, there’s an expectation that chatter will die down as soon as they get through the episodes, but the campaign made sure that didn’t happen.”

“We let the audience tell us what they wanted to see.”

This opened up new ways to not only produce content on each channel but to find innovative ways for users to engage with content and create an engaging community, explains Austin Mitchell, Social Content Producer at Movement Strategy.

“We would go to Twitter and listen for people talking about very particular things,” Lisa says. “We let the audience tell us what they wanted to see by taking conversations from Twitter to create Instagram stories to create a Facebook video and then taking those comments and compiling those into a video, too.”

Here’s how it worked: Shortly before the show’s debut, the social accounts were all shutdown with “Closed Crime Scene” information on each page for 48 hours. Then, the new trailer dropped on every channel. When the series hit Netflix on July 1, it was all systems go, as was the custom Google Drive folder, which housed the Unsolved Mysteries Case Files that featured an episode-by-episode breakdown of exclusive cutting room floor footage and investigative reports for fans to sleuth through to try to solve each case. The Google Drive link was shared on every channel, including Reddit, where past cases of the show were still being talked about.

Activating Google Drive as a social platform added a large element of engagement, especially as Google Drive is not inherently thought of as a social media platform but as a work platform or a document-sharing service. Using it provided a unique element for fans to feel like they were part of the show and recognized by the brand as participants of the crime solving.

“Anyone can binge watch this show and think about it with their own theories, but what we gave audiences by treating Google Drive as a social platform, and posting case files and information was the opportunity to see things like a closeup of a note that was flashed on screen in an episode for only two seconds or cutting-room floor footage,” Lisa says.

Pairing Google Drive with Reddit is a prime example of coupling together channels that many might not typically think about. As the Movement team analyzed audience behavior and practiced social listening, it became a no brainer.

Reddit, though, cannot be treated like a promotional space. Marketing on the platform is a balancing act between appealing to the audience and trying to sell something.

“Netflix has really mastered that fine line of being a part of the Reddit community,” Lisa says. “It’d be one thing if Netflix posted about new episodes trying to get people to watch, but instead our tactic was, ‘Hey, you’re a fan, here’s a Google Drive of information.’”

Meanwhile, on Facebook, the team launched six groups, one for each episode, where fans could share theories and comments that helped the Movement team create content like video compilations and evidence roundups tailored to theories and popular questions. Fans were also invited to share tips on the cases and stories of their own. Their theories were surely built on what they came away from the show thinking but were also expanded by what they could gather from the Google Drive.

These theories, and the engagement across all channels, inspired memes and show footage to share on Twitter and Instagram, where a lighter and humorous tone about the show’s serious subject matter was emerging. And on YouTube lived a five-hour looping video of the show’s theme song set to creepy footage.

This listening style, and all-in multi-platform approach, allowed the team to adjust and rethink what they thought might be good for one channel or another. Ongoing listening, Lisa says, was the glue that held the campaign together, as it forced the team to adjust by thinking about what audiences are interested in, what they’re talking about, what they’re curious for more information on. Austin says the campaign’s success also ignited questions about how campaigns in general can use multi-platform approaches to create communities.

“Merging these channels and mediums, letting them kind of bounce and feed off each other, helped us nail that sweet spot,” Lisa says. “And realize for certain brands and campaigns, more than one channel does work better together.”